So you knew I was going to talk to you about my stint in the joint, right?  We’ll jump back into the Daniel series tomorrow.

Prison will change you.  Whether you live there, work there, or visit – it will change you.  For some, the experience will bring about a greater appreciation of the freedoms they have “on the outside”.  Who wants to – now, really – be told when they can eat?  No one, not even those who say “Just tell me when it’s time to eat.”  That would drive me nuts.  Plus, I like to snack.  There are no snacks in prison.  You get three meals, and those in charge tell you when you can eat them.  They also dictate what you eat.  We really need to pray that God grants them a spirit of grace.  I’m not sure if grace actually counts as a Fruit of the Spirit, but I’m pretty sure it has to be one of them.  You know, there are some lost scrolls…maybe the piece on the grace-fruit is in those.  Let me get off my food rant.

One of the things I’ve noticed about my interactions with the inmates is that they always talk about their release date.  Very seldom do they talk about why they are there in the first place, but that release date – yeah, buddy.  It’s almost like their “verse of the day” – it motivates them.  They not only talk about their release date, but all of the things they are going to do once they are released.   And it’s not grand stuff, either.   No one’s talking about ending world hunger, but spending time with their children and going to church are on the top of their to-do list.   There is so much they want to do when they are released.

I always go into any type of ministry with the hopes that God will not only minister to those in my presence, but that He ministers to me as well.  I never know what to expect, although there are times that I try to dictate what that will be.  I’ve told you before that I can conjure up all kinds of scenarios where I think God is saying a certain thing to me – which will be totally different than what He’s saying to everyone else.   This time, He talked with me about all of the things He wants to do when He is released.

The picture that was given to me was one of a horse.  I have never ridden a horse and I don’t have any desire to ride a horse.  Large beasts scare me.  When I was a little girl, I was made to ride an elephant at either a circus or state fair.  I was terrified.  Things happen when I am scared.  If that booger smelled bad before I got on it, it definitely reeked once I was back on the ground.  Horses terrify me.  I’ve seen too many westerns when someone was thrown from one and got stomped in the chest.  No thank you.  Anyway, the picture was that of a horse. I had put a bridle on it and was trying to pull it one way and then the next.  No matter how hard I pulled, the horse would not budge.  God spoke into my heart, “Release Me.”

I’ve been holding the reins.

My “need” for control stems from things that have happened to me in my past.  “But I thought you trusted God, Minister Deone?”  I do – to a certain extent.  When it comes to ministry, my hands do not touch the reins.  I.  LET.  GO.  Now.  I didn’t before.  I had to first see how God moved when I gave the reins a little slack before I would let go completely.  Now, God can tell me when and what, just as those guards do with the prisoners.  My mindset is that of Apostle Paul when he said in Ephesians 3:1, “For this cause I Paul, the prisoner of Jesus Christ for you…”.  All day, every day – that’s me.  But when it comes to life, especially matters of the heart, not so much.  I like to control that.  But then I also ask God to do stuff in that area.  And He can…as long as I get to tell Him what and when.

The first thing I had to address was the “why”: why do I not want to let go of the reins and let God just do His thing in my life?  So I asked Him.  Because then you won’t be the one in control and that frightens you.  Plus, you don’t know what that looks like.  True, true.  I don’t know what that looks like and Holy Spirit is kinda radical – He likes to stir up stuff.  I don’t mind when He does it in ministry, but it…I don’t know.  That kinda unnerves me when it comes to my personal life.  And yet, I still pray for God to move…as long as He moves my way.

If this is speaking to anyone, receive it.  Do not pray for God to move in your life and then try to tell Him how to move.  We can’t dictate it.  I say that, but let me clarify something: God is not going to go against your will.  “Thy Will be done…”  Jesus told his disciples to pray that for a reason.  It’s not a permission statement: it’s an admission statement.  We are admitting that we need His Will to be done in our lives and we are surrendering ours.  As long as you have a pit bull grip on the reins, God can’t do what He wants to do in your life.  And oh, does He want to.  We have to let Him.

So, I asked God what fully releasing the reins would look like.  He knows his girl has this “I need to know ahead of time” issue.  So He showed me. 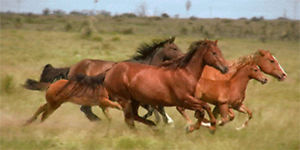