This is really a weird way to kick off our “Masterpiece” study series, but I’m sure you’ve come to expect that from me because I’m weird.  I know this.  I fully embrace my weirdness.   I want you to see this PrintScreen I did a few moments ago:

When I logged-on my computer, that scene absolutely blew me away…that is, after I looked at the time which is in a larger font than everything else.  If you stare at the 4:31 long enough, it will start to pulsate.  Look at the scene, though.  Isn’t it beautiful?  I thought, “God, what an awesome way to start off my morning!  Look at all that You created!  So perfect!  A masterpiece!  Ha!  And here I am about to talk about masterpieces!  Thanks for the sign!!”  Can you really blame me for my excitement?  Look at the beautiful colors of the sky and how everything seems to just flow together – perfection.  After I looked at that for a minute, I started typing away – good stuff – and I cannot wait for you to read all that I typed… tomorrow.

Halfway through what was supposed to be the first installment in this series, God said, “Look at the picture BEFORE you cropped it and tell Me what you see.”  Okaaaay…

In the background, you will see a portion of my home screen which is a picture of my favorite t-shirts.  I used this image for a blog titled “The Perfection Among Us”.

This will be the intro into this series.  It’s a continuation of that blog, but we will only focus on Peter this time because he is the inspiration of “Masterpiece”.  I’ve copied the blog entry below.  Happy reading!

The Perfection Among Us

Jamie looketh on my outward appearance that night and saw a real-life, in-living-color saint.  Bless her heart.

During the summer months, a few churches in my town take breaks from some of their weekday activities so that families have more flexibility with their schedules.  This may include mid-week bible study.  That was certainly the reason why I had a few new faces in class the night I gave my intro to “Faith & Messy Humans”.  I was like, “Who are these people??”

By the way, this is the intro to our series.  My bad.

Among the new faces was a pretty and bubbly woman named Jamie.  She sat in the second row and she gave me her undivided attention.  As I went through examples of how you can’t always run with your first impression, I noticed her eyes land on my shirt occasionally and I knew that the impression I was trying to give that night worked.  Got ‘em! 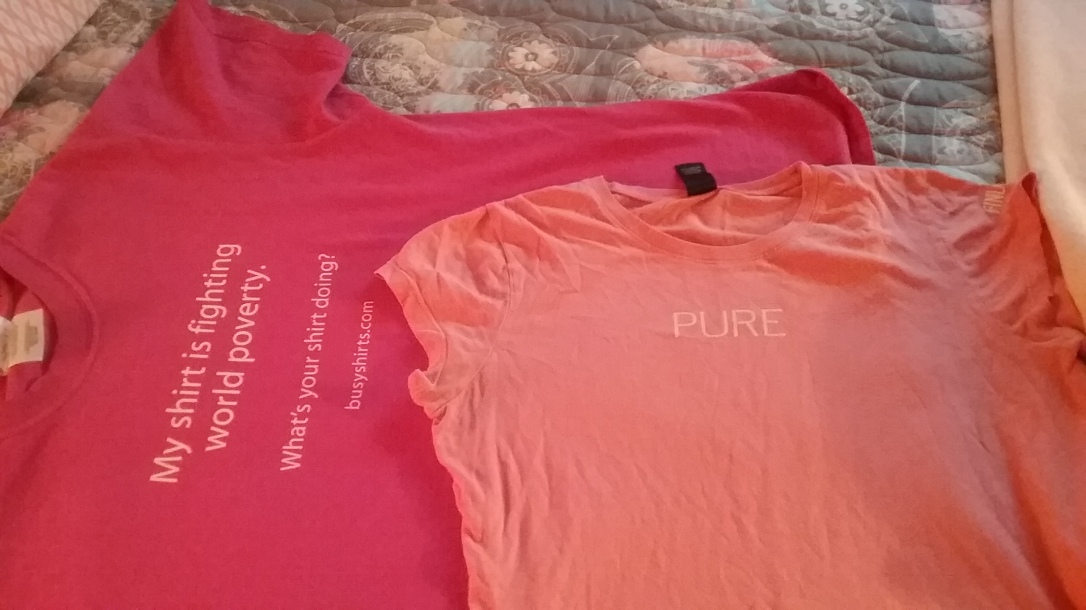 At the end of my intro, I stressed the importance of not judging your walk by what you see others doing.  You don’t know their life.  I told them to check out my shirt, like they hadn’t been staring at it for the last 45 minutes.  What impression does it give?  It makes me seem all socially-conscious, charitable and such, doesn’t it?   I am, but the shirt really is doing the most.  Plus, it’s bright pink.  “My shirt is fighting world poverty.  What’s your shirt doing?”  Yeah!  In yo face!  What yo raggedy shirt doin’, son??  Jamie thought she was being taught by someone super special. No wonder God was using ME to teach bible study: I was wonderfully amazing!  I am not just fighting poverty, but I’m doin’ it worldwide, baby!!   And she sat there judging herself because she wore a Cubs shirt that night.  Seemed a little half-steppin’ next to mine.

Girl, bye.  I bought that shirt during the 67-cent sale at the Salvation Army.  The cost of my shirt barely covered tax for a 4-piece chicken nugget meal.   It would’ve gotten its butt beat down in a fight against world poverty.  Please.

Whatever my shirt originally contributed to the fight is long gone, sis.

One of the things we humans tend to forget is that we are walking among other humans.  And dogs.  Yes, we are.  Humans who are just as jacked up as us.  And I mean “jacked up” in the nicest way possible.  Flawed folks.  Issue-laden people just trying not to drown in their own messiness.  And I’m not talking about the unchurched right now.  I’m talking about followers of Christ – us.  Believers.  Those who are at the church house every Sunday and Wednesday.  Those who wake up at the crack of dawn (and tell you that they do) to spend “precious moments with Jesus”.  The ones whose well-worn bibles have pages that are tattered from years of fervent study.  And speaking of fervent…man!  Their prayer game is on point!  Those who have every “I’m a Christian” t-shirt ever screenprinted.

Those people…them right there?  They are flawed.  Mess-eee.  Oh, for the day when perfection kicks in!  (I just said that like it’s puberty or something. Ha!)

I’ve got some news for ya:  the men and women of Hebrews 11 were flawed, too.  And we’ll find out more about that as we dig into their lives a bit over these next few weeks.  Check it: Abraham, known as the “Father of Faith”, was a liar.  David, best known for killing Goliath (and his fineness), was also an adulterer and accessory to murder.  Peter…hmmm.  Peter, Peter, Peter.   Peter was one of Jesus’ boys.  He walked with Him daily and took part in many of the miracles that Jesus did.  I’m pretty sure he wasn’t trying to set Jesus up for another miracle when he cut dude’s ear off.  Oh yeah: there’s that denial thing too.  Also, he quite the temper. Ear? Slice and dice?  Did you see that?  And you thought Jesus kept Peter close because he was so holy and spiritual.  My guess is that He had to keep Peter with Him at all times because He knew how much trouble he could get into if He didn’t.  MESSY!!

Let me say this before we start: this is not a bash-fest.  My goal is not to dig up dirt just to say, “See.  I told you they weren’t about nuthin’.”  (double negs…gotta love ’em)  I want you to get that God does great things through not-so-great people.   Really, that’s all He has to work with!  I mean, He did say He’d use a rock if He had to, but I know none of us want that.

God does miraculous things through messy people.  Like, you and me.   The purpose of this study is to encourage you and to let you know that who you are and what you’ve done doesn’t take a lick of power away from Him.  Your mess doesn’t render Him ineffective.  He doesn’t look at you and say, “Great.  This is what I have to work with?  Ugh.”  Nope.  Your mess is what makes the miracle a miracle.